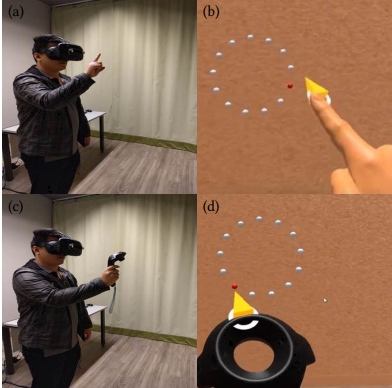 We detail the results of two experiments that empirically evaluate the efficiency of spatial selection performance of popular pointing and controller based direct 3D interaction within the participants’ maximum arms reach or personal space in an immersive virtual environment. In the first experiment, targets were presented in a circular configuration of 13 targets in accordance with the ISO 9241-9 Fitts’ Law standard, with a target distance of 5, 9 or 18 cm and target width of 0.65, 0.85, or 1.05cm, and with each circular configuration presented in a random distance of 60%, 75% or 90% of maximum arms length of the participant. The targets were centered at eye level, and in a within-subjects protocol participants selected the targets using a pointer at the tip of the controller or at the tip of their index finger on the dominant hand in the pointing based condition. The second experiment presented each target in a similar width and distance configuration as the previous experiment, but each target also varied in depth from one trial to the next between 60%, 75% or 90% of maximum arms reach. The selections were performed in an HTC Vive head mounted display VR world, using the popular Leap Motion gesture tracking device or the Vive controller. The results of both our experiment taken together revealed that with commodity 3D input devices, participants were more efficient in spatial selection performance in the popular controller based condition, as compared to the pointing based condition. Implications for VR developers and consumers are discussed in the latter sections.